Libby is perhaps best known for her role as Gina Rossi in the popular BBC Scotland drama series River City. However during her career she has been cast in most of the well known Scottish Televisions ‘home spun’ programmes. See Credentials.

In the eighties and nineties, Libby indulged her love of comedy through  ‘Redheads’ and the formation of the company ‘The Penny Mob’, which offered opportunities for her to write, perform and direct. Already having thrown herself into the world of stand-up, she also regularly appeared as the ‘warm-up girl’ for several shows. She was with Kaye Adams in this capacity at ‘Scottish Woman’ on and off for seven years. Also making regular contributions to Radio, on both Eddie Mair and Fred McCauley shows.

Throughout her career a constant aspect to her work has been her evolving programme of ‘Creative Workouts’.  She has taken these creative self expression styled workshops into schools, F.E. colleges, Universities, Drama groups, Hospitals, Mental Health Units, Prisons and recovery groups all over Scotland.

In her time, she has had more than one Session with John Peel. Rode the Tube with Jools Holland. She has been usurped in her role as mother to her son, by Liam Neeson and Jessica Lang in Rob-Roy. On television she has played the role of wife to Ford Keiran, Fish and Andy Cameron; daughter to Miriam Margoyles, Annie Ross and Johnny Beattie; sister to Andy Gray, Forbes Masson, and Bobby Carlyle and has even been taken advantage of by Stefan Dennis. 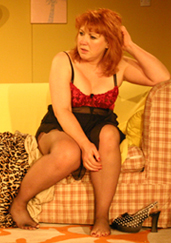 “Libby…she is one of Scotland’s best actresses – An Icon”