Born into a large working class family, Libby was raised in Castlemilk, a housing scheme in the South of Glasgow. Her father a fireman and her mother a nurse, there was a strong element of, ‘service to others’ in her upbringing. Her desire to follow this lead was strong. She realised early she had the ability to entertain and found her first audience by putting on plays and telling stories in the backcourts. She knew there was healing to be had in stories. Reading everything she could get her hands on from the library and Grimms fairytales on a loop, her writing became her passion.

By the age of fourteen she had her own drama group at the local YMCA. By seventeen with the ‘Gorbals Diehards Theatre Company’ and the Youth Opportunities Programme (YOP) she learned puppet skills, wrote and directed. She then produced a whole series of plays devised for ‘The Gorbals Fair Project’ through the difficult years of the early eighties. By twenty -one she was a Drama Supervisor with the Youth Training Scheme (YTS) taking several groups of young people from writing and performing into full paid work. During the City of Culture in 1990 she became ‘Drama worker in residence’ in Blackhill, culminating in a huge production, both devised and performed by locals.

Libby has been a student of ‘ A Course in Miracles ‘ for twenty years. She has also followed many teachers who have inspired her through these years all over the U.K. and abroad. She won a scholarship at ‘The School of the Science of Acting’ in London where she co-directed two productions. Libby has brought her own brand of creative storytelling  into many fields of work never losing that sense of the restorative power of stories. Libby loves her city and thinks Scotland is one of the most dynamic, cultured and nurturing environments in the world. 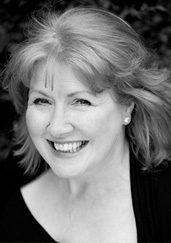 “Libby it is never a trawl with you, you are pure mint and it is always a joy. It is all about leaving a legacy and Libby you have spent a lifetime leaving them behind you. It is always a pleasure working with you and I always feel inspired afterwards, you restore my faith.”